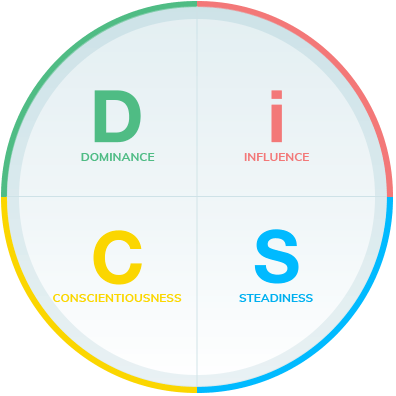 DiSC® is a personal assessment tool. It is used by more than a million people each year to help improve teamwork, communication, and productivity in the workplace.

DiSC helps understanding people better without judging or labelling. Individuals and teams, when getting where differences come from, build bridges and make the common workplace a better one. Interactions matter and people care about them: DiSC adds value to the workplace.

The challenge in
interpersonal relationships

When people don’t see eye to eye or have different perceptions on the same issue, they sometimes fail to understand why the divergence or misunderstanding happens in the first place. This can lead to conflict or guarded behavior, while not getting to the point of the issue.

The DiSC® model provides a common language people can use to better understand themselves and those they interact with. Knowing where the other person comes from, helps reduce conflict and improve working relationships.

Why use DiSC for more productive interpersonal relationships

DiSC is a tool that helps building more effective relationships

Teams are where it happens in the modern workplace. With DiSC you learn how to communicate better and understand your other team members.

With a DiSC profile, transform disagreement, or even conflict into a positive, productive exercise that helps your team move forward and produce the right outcomes.

Constructive learning begins with self-knowledge. DiSC shows you how you respond to conflict, what motivates you or stresses you out, and how you solve problems.

With DiSC you can also improve your effectiveness in sales situations. Understanding and adapting to your customers’ preferences is key for connecting and reaching agreement.

Leaders, once they understand their people’s preferences and working styles better, can inspire naturally and be more effective with their peers, team and other stakeholders.

People dislike being judged or pointed at. With DiSC the playing field becomes neutral by providing trainers and coaches the non-judgmental information they need.

Discover the DiSC theory and how it works

To discover Everything DiSC is to discover the DiSC® behavioural model first proposed in 1928 by William Moulton Marston. He never created a psychological instrument to measure his model. He wrote the DiSC personality theory, the assessment was created by others later. Among them, Walter Vernon Clarke, John Cleaver and John Geier, and of course Wiley, publisher of Everything DiSC.

Wiley’s current understanding of Everything DiSC incorporates some of the basic principles advanced by Marston, as well as additions and changes made by advances in psychological measurement and theory.

Discover the two dimensions of human behavior with DiSC

DiSC personality theory starts with the vertical dimension, best described as level of activity, ranging from active to thoughtful. People with DiSC personality styles at the top of the circle tend to be fast-paced and are often described as assertive, dynamic, and bold.

Traditional explanations of the model suggest that these people perceive themselves as more powerful than the environment. Because of this perception, they tend to exert effort to change their circumstances.

Conversely, people with styles that fall toward the bottom of the circle tend to be more moderate paced and are often described as calm, methodical, and careful. Traditionally, these people are thought to perceive themselves as less powerful than the environment, and thus they are more inclined to adapt to existing circumstances.

Discover Everything DiSC and why people skills are important

Our workplaces are undergoing change at an unprecedented rate: automation, disruption, and innovation can make it difficult to keep up. In the midst of uncertainty and change, organizations need to pay attention to their main most valuable resource, their people. Discover how Everything DiSC contributes to making the workplace a better place.

Once you know more about DiSC, you can unlock the potential of your people and the power of your culture with the Everything DiSC® Application Suite.

Discover the DiSC theory and how it works

Optimally, you should try to provide instinctive answers to the Everything DiSC questions, focusing on who you are. By following this approach, it should take approximately 15-25 minutes to complete an Everything DiSC Workplace assessment. The timing varies, depending on the type of profile and responses that can trigger the adaptive testing capabilities of the assessment. Once you complete the questionnaire, the profile report is generated – you will get immediate access to the report or it can be retained by a facilitator, for example, until the date of a team DiSC session.

There are six profiles in the Everything DiSC range. The foundational Workplace profile is suitable for use with individuals at any level in an organisation. Everything DiSC Management and Work of Leaders are aimed at those who have direct reports or lead a team. An even more specific profile such as Everything DiSC Sales provides valuable insight to anyone who has a responsibility to sell to customers, external or internal. The Everything DiSC profile range has been successfully used by organisations of all sizes. Self-awareness and people-skills are fundamental to developing winning teams, no matter their size!

The assessment is online, is it also available paper-based?

The Everything DiSC assessment is administered via an online portal, called EPIC. It uses adaptive testing technology, which means that the questionnaire adapts to the variance in the asnwers the respondent provides. This ensures the profile report is more accurate and personalised. Everything DiSC is the only DISC assessment that incorporates adaptive testing. Alternatively, an paper based assessment still exists, in essence 50 years old. The accuracy is not the same.

How do I know if my DiSC profile will fit in my team?

The Everything DiSC profile suggests some “Cornerstone Principles,” such as: all DiSC styles are equally valuable; every individual is a blend of all four primary styles; and you are more than just your DiSC style. The profiles aim to create self-awareness and provide strategies for self-management. As you uncover where your preference is on the DiSC map and what this means in relation to the rest of their team, the strengths and limitations of each style become identified, understood and better, respected. All Individuals are thereby equipped to adapt their behaviour to the needs of their team members and to create more effective workplaces one relationship at a time.

What can I expect from my team after we or they do DiSC?

DiSC is a valuable tool for creating better interactions and more engagement in an organisation from the bottom up. The team, in a DiSC session, will be provided with resources to enable each individual to take ownership of their working relationships, and to better understand their own needs and how those differ from others. As they become aware of their needs, the needs of their colleagues, and how to meet them, chances are that you whitness enhanced trust, respect and openness among team members. A significant body of research shows that increased levels of trust and collaboration in a team or organisation has a positive effect on business results.

How can we ensure learning continues beyond the workshop or DISC session?

DiSC is effective at creating common language around behavior in a team or an organisation. The profile uses objective, neutral terminology to enable team members to talk about how their behaviour is perceived and affects the dynamics of the team. It is important that this language is kept alive by incorporating it in team meetings, one-on-ones with leaders, performance reviews and more. Additional, tools such as the Everything DiSC Comparison Report and the MyEverythingDiSC.com online platform support teams to keep the DiSC culture alive by enabling colleagues to compare their behavioral preferences and find practical tips for interacting more effectively in common, work-day scenarios.

How can I do DiSC with my team, once I have been to a DiSC workshop?

disc partners offers a two-day DiSC Certification training. Sessions are regularly organised and can also be taken online. This certification training provides you with the theoretical foundation in the Everything DiSC profile, as well as allowing you to practice debriefing the profile and delivering some valuable conceptual models and activities which can be incorporated into a DiSC session. We provide you with ongoing support: you are always welcome to contact us with questions or even to discuss how you plan to deliver an upcoming training session. Learn more about Everything DiSC Certification

I heard there are several versions of DiSC, are they all the same?

The short answer is, no they are not all the same. The DiSC assessment has been around since the 1950s. Wiley Workplace Learning Solutions have invested significant resources and research to develop the tool into a modern, scientifically valid and reliable instrument. The backing of an academic publishing powerhouse like Wiley has certainly taken DiSC to places where it’s never been before! To get a more detailed answer to this question, please view our blog DiSC is not the same as DISC).

How do I manage the DiSC profiles and send invitations for assessment?

EPIC is the online platform that is used to administer the Everything DiSC and Five Behaviors profiles. disc partners can create an EPIC account for your organisation, so you can send out assessment links to participants; generate profile reports; issue access to myeverythingdisc.com; and track profile usage data, among others. EPIC uses credits, a virtual currency. This curreny can be purchased from disc partners, which will then be deducted from your account depending on the type of profile you generate.

HOW CAN WE HELP YOU?

HOW CAN WE HELP YOU?